Knowledge of timber rafting on the Upper Drava
Knowledge concerning nature and the universe in Carinthia, inscribed 2014

Every year, six communities build rafts and run them down Austria’s last free-flowing stretch of the Drava in order to keep age-old rafting knowledge alive. Up into the 20th century, the Drava was an important Carinthian west-east transport route and was known as the "Kärntner Holzstraße" [Carinthian Wood Road] for sawmills and, later on, cellulose factories from the 17th century onward. From Upper Carinthia, logs and sawn wood, iron products, and other goods were transported downriver using timber rafts.

The earliest documentation of freight transport on the Drava is from 1209. The rafts used were 21.5 m long, 4.5 m wide, usually featured two rudders at the front and one in back, and were piloted by two or three men. They were tied together using “Wieden” (twisted hazel stalks) and/or ring hooks made of iron. Among the raftsmen, there arose an informal system of training comprised of statuses ranging from Lerner (“learners”, or apprentice assistants) to the experienced Vorfahrer (the front/lead pilot) in which special knowledge was passed on orally. In conjunction with rafting, the Upper Drau Valley developed a number of special cultural features such as the Drautaler Flößlersprache [Drau Valley Rafters’ Jargon] as well as names of specific fields and meadows, culinary specialties, and clothing designs that can be attributed to the raftsmen. Even following the introduction of rail transport to the region around 1900, rafting continued to enjoy a certain significance into the 1950s, when competition by motorized road transport as well as the build-out of hydroelectric power plants brought raft transport to a halt.

The specific technique of raft construction and piloting employed on the Upper Drava has been kept alive there to this day. Every August, the Verein der Oberdrautaler Flößer [Association of Upper Drau Valley Raftsmen] holds its “rafting days” in which six communities (Oberdrauburg, Dellach, Berg, Greifenburg, Sachsenburg, and Spittal-Baldramsdorf) send traditionally constructed rafts floating down the Drau. This helps contribute to a special regional identity both within and between the participating village communities. 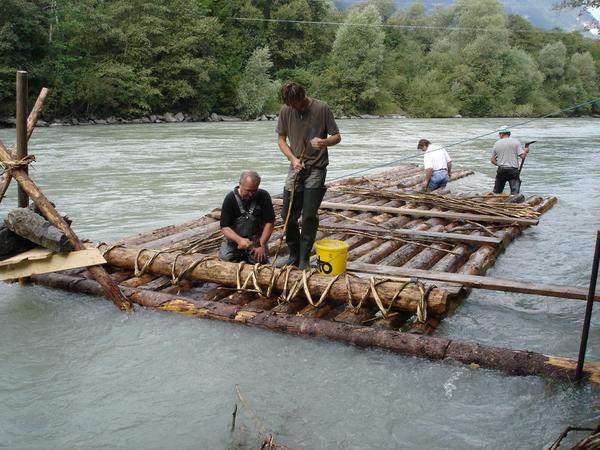