The St. Nicholas Play in Reith ("Reither Nikolausspiel") is held every seven years in the village of Reith im Alpbachtal. The Reither Nikolausspiel consists of twelve scenes (referred to as "Bilder" [lit. “pictures,” an antiquated term for “scenes”]), in which the poor’s defiance of the rich and powerful, as well as the battle between good and evil, are portrayed. Until 1919, this fundamentally religious and pedagogical dramatic work was performed in private homes, with local lay-performers going from farm to farm in Reith playing individual scenes.

There exists documentation of St. Nicholas Plays having taken place in many communities during the 18th-century, which represented their heyday. Nikolaus and Krampus are the central characters, whose appearances are embedded in a series of cheerful and satirical scenes. These moralising stories are reflections of societal norms and values rooted in the missionary activities of the Jesuits during the Counter-Reformation. The content of these traditional St. Nicholas Plays is the “Everyman” motif that addresses an adult audience.
Over the course of the late 19th and early 20th centuries, most of these plays ceased to be performed. The St. Nicholas Play in Reith is now the only such play that can look back on a continuous performing tradition. Since 1919, the tradition of performing individual scenes in private parlours has been replaced by performances of the entire play, with its 12 scenes, onstage in the theatre hall of Stockerwirt, a local inn. The takeover of organizational responsibilities by the local band put the St. Nicholas Play on an institutional footing. The manuscript of 1875 is in the possession of its author’s family, and it still serves as the basis for performances today. The costumes and stage scenery, however, have been repeatedly renewed, with the plays accompanying music having been added to in 2004. In contrast to other such plays, this St. Nicholas Play is not acted in exclusively by men; its performances also include female cast members. 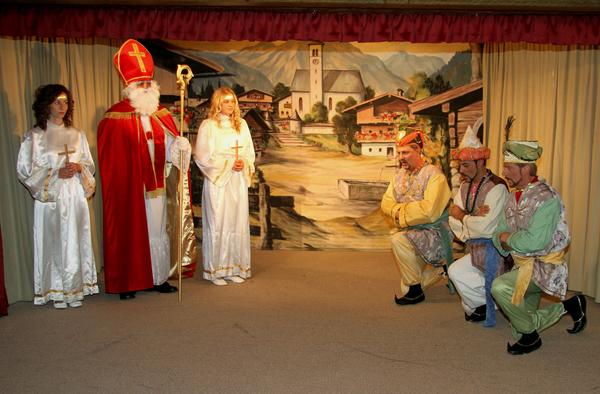