When they settled in the Southern Burgenland town of Stinatz/Stinjaki in the 16th century, Croats brought specific elements with them that, influenced by regional characteristics as well, made the weddings in this town a testimony to transcultural relations. The wedding custom combines orally transmitted traditions, such as the Stinatz dialect and folk songs, with traditional handicraft techniques like the production of the local (wedding) costumes. This custom illustrates the identity of the community as a part of the Stinatz village population and as members of the Croat ethnic group.

The Stinatz wedding traditions have developed in the town since the Croat community settled here some 500 years ago. The custom as it is practised today can be traced back to the end of the 19th century. Important figures in this wedding ritual are, aside from bride and groom, the posnašnica (maid of honour) and the staćilo (groomsman), who lead the ceremonial customs of the wedding dressed in their typical Stinatz wedding costumes. The Stinatz wedding ceremony begins in the morning, when first the staćilo and then the posnašnica are fetched. They, in turn, fetch the groom and then the bride and accompany them in a festive procession to the wedding location. The presence of the spectators is important for this ritual, as they represent the “audience”. The procession is accompanied by a wind band playing its repertoire of polkas and waltzes. Following the wedding ceremony, the “dance in front of the inn” takes place: there is much dancing and music-making, with traditional Stinatz wedding songs sung by the wedding guests—some in the specific dialect of Stinatz. The participants in a Stinatz wedding include not only the bridal couple, the staćilo and posnašnica, and guests, but also all the townspeople.

The traditional costumes worn at the wedding combine traditional handcrafting techniques, such as the special form of sewing and folding the costumes, that are passed on from one generation to the next. The multi-layered costume of the posnašnica is particularly elaborate with regard to its ornamentation: the colourful skirt, for example, is adorned with various shawls and ribbons, and the headdress consists of an elaborate wreath. The hat worn by the staćilo is no less elaborate, decorated with peacock feathers and artificial flowers.

The wedding ritual serves as a space for speaking the Croatian language, singing traditional Stinatz songs and wearing the typical Stinatz costumes, thus contributing to the self-awareness of the Croatian minority. The systematic collection and documentation of the knowledge of these traditions is aimed at ensuring the unbroken continuity of the customs. 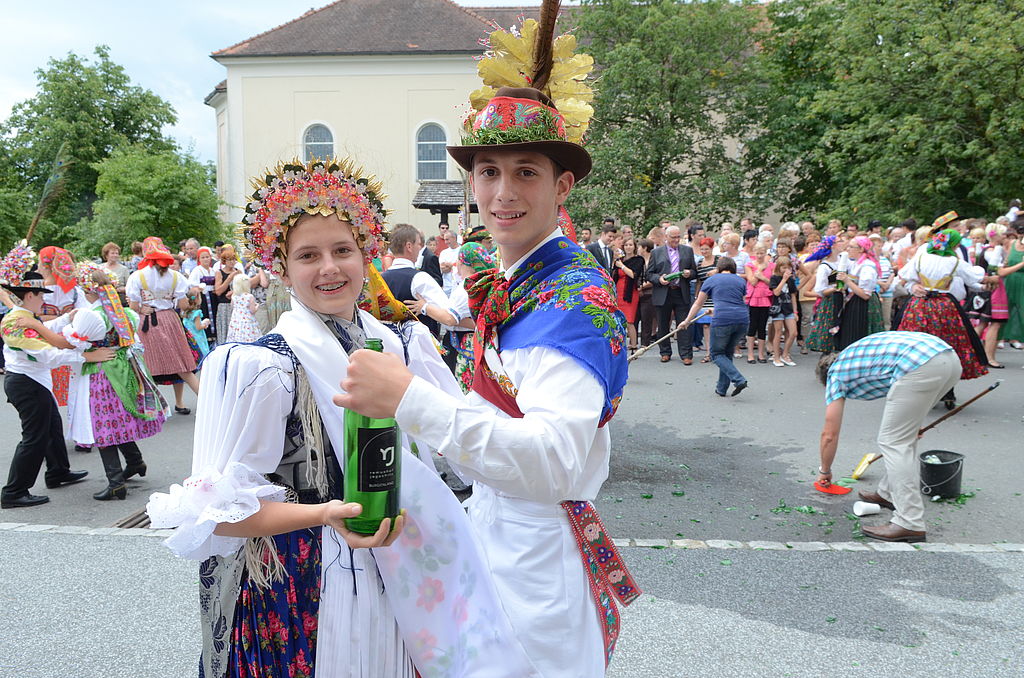