"Schemenlaufen" - The Carnival of Imst
Social practices in Tyrol, inscribed 2010

"Schemenlaufen" denotes a Carnival ("Fasnacht") procession in the Tyrolean Oberland town of Imst that features 26 different types of masks and is characterised by its bright colours, constant motion, and a fascinating rhythmic sound. Carnival traditions in Imst are documented as far back as 1597 and have been celebrated with unbroken enthusiasm right up to the present day. The "Schemenlaufen" takes place (with some exceptions) every four years in February, most recently in 2016.

The Schemenlaufen, as a tradition that goes back centuries, is conducted in a largely ritualised manner. The knowledge necessary to do so is handed down through families from generation to generation, for the most part by means of oral transmission. The masks, made exclusively of carved wood, as well as the various costumes are in part historic and in part newly made. Knowledge pertaining to these masks’ production as well as to the various figures’ actions and behaviours is likewise passed down from generation to generation.

In general, the old principle holds true: “Fasnacht is free!” The only requirement for participating in the Schemenlaufen is that one’s residence and the centre of one’s vital interests be in the town of Imst, meaning that new residents of Imst may participate actively after having familiarised themselves with the tradition for eight years. In a Fasnachtsjahr (a year during which this Carnival event his held), 6 January—the Kinigtag [Three Kings’ Day / Epiphany]—witnesses a meeting of the Fasnachtsversammlung [Carnival assembly] whose attendees elect a committee. This committee assumes all of the necessary organisational responsibilities with support from numerous helpers.

The Carnival festivities in Imst are among the largest of their kind and contribute to the character of the town and its inhabitants. In 2009, there were around 870 active participants—which, all by itself, speaks volumes how deeply rooted this tradition is amongst the populace.

In 2012, this tradition was inscribed on the international Representative List of the Intangible Cultural Heritage of Humanity. 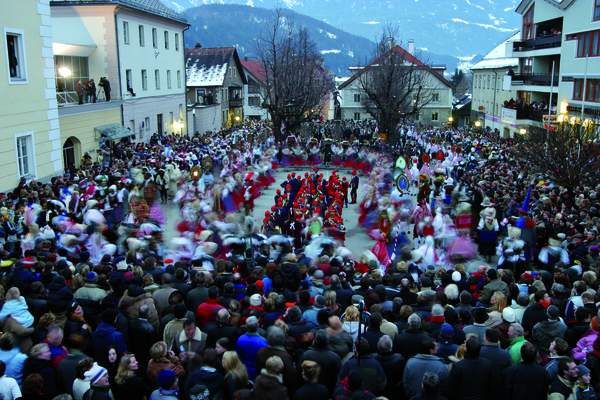