The tradition of bird-catching in the Salzkammergut region encompasses the capture of individual members of endemic forest species during the autumn, keeping these birds in aviaries following the catching season, and showing them to the public the Sunday before "Kathrein" (St. Catherine’s Day) in late November at the woodland bird show in which prizes are awarded for the birds judged most beautiful in terms of their magnificent colours, health, and state of care. In the spring, the birds—with the exception of those kept for use as lures—are once again set free.

It was over centuries and generations that the necessary knowledge of bird behaviour was gathered and passed on, leading to the development of a specialised terms pertaining to feed, the birds themselves, and various procedures. For some bird species, the Salzkammergut region’s bird-catchers employ finer degrees of taxonomic distinction than does science—speaking of the Grobschreier [rough crier], Guatschreier [good crier], and Hellschreier [bright crier] in the case of the crossbills (Kreuzschnäbel), the Bliahstieglitz [blossom goldfinch] in the case of the goldfinches (Stieglitzen), and the Stoagimpal [stone bullfinch] in the case of the bullfinches (Gimpeln). To sustain these birds in captivity, it is necessary to gather appropriate bird food the whole year round. This consists of natural seeds, herbs, and buds. Changes have been made not only to the methods of bird-catching—which originally involved glue-covered sticks and traps in connection with live lure birds and is now done using netted traps—but also in terms of the species that are allowed to be caught: while the permits issued in 1910 still indicated 16 species, the 20th century eventually saw bird-catching limited to four (siskin, goldfinch, bullfinch, and crossbill.)

For over 150 years, the bird-catchers have been organised in associations that participate actively in village life—and they also stage numerous other activities in connection with their woodland bird shows. Furthermore, nearly every regionally styled nativity scene includes either a “bird-catcher’s corner” (Vogelfängereck) or one of the four abovementioned bird species. The motif of the bird-catcher can also be seen on the decorated caps of Glöckler (see the tradition “Glöcklerlauf in Ebensee”) and in carnival processions. And finally, bird-catching is also present in the region’s body of songs and poetry. 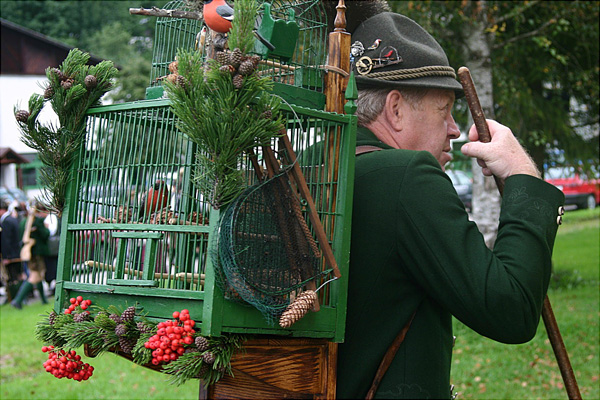