The term ‘flaming’ (Flammen) denotes the application of a recognisable pattern to ceramic objects. Recurrent decorative elements could be found on pottery in the area around Gmunden as early as in 1600. The earliest pieces of pottery found in blue and white from this region date back to this period. They led to the development of a decorative technique that is typical today: the Geflammte (‘flamed’) or Gmundnerische Geschirr (‘Gmunden tableware’). Nowadays, the flamers pass on their knowledge from person to person and it takes around two years to learn this craft.

The natural occurrence of certain raw materials, potters’ clay containing iron oxide and calcareous marl clay, gave rise to the early ceramic tradition in Gmunden, which can be traced back to 1492. Initially, some of the main characteristics included colourful dots and patches on a white lead glaze, which created a kind of marble effect using the colours light green in combination with cobalt blue, deep green, and brown. This Fleckentechnik (‘patching technique’) led to the development of flamed decor in the 18th century.

The flaming technique involved working in a specific rhythm with a Malhorn (‘painting horn’) to apply pigment directly to the white ground glaze. Ribbons and loops, stripes, wavy lines, and arcs were, and still are, typical patterns. The combination of green banding and white ground glaze characterises the typical ‘green flamed’ wares. In the 1970s, the painting horn was replaced by a so-called Malhörnchen or Piperl (‘bulb syringe’). At present, the pattern is applied to jugs, plates, and bowls, as well as stationary, screw cap bottles, and shaving bowls at a flaming station. By using new colour combinations or applying the flaming technique asymmetrically, the traditional craft is constantly reinterpreted.

It takes two years of training to become a flamer, as the flaming technique is still carried out purely by hand, and great emphasis is placed on sustainable and local production. These days, both the training of flamers and production take place almost exclusively at the ceramics manufactory in Gmunden.

The town of Gmunden also regularly hosts publicly accessible ceramics symposia as well as pottery markets, where visitors can view ceramic works by both local and international ceramics craftspeople and artisans. 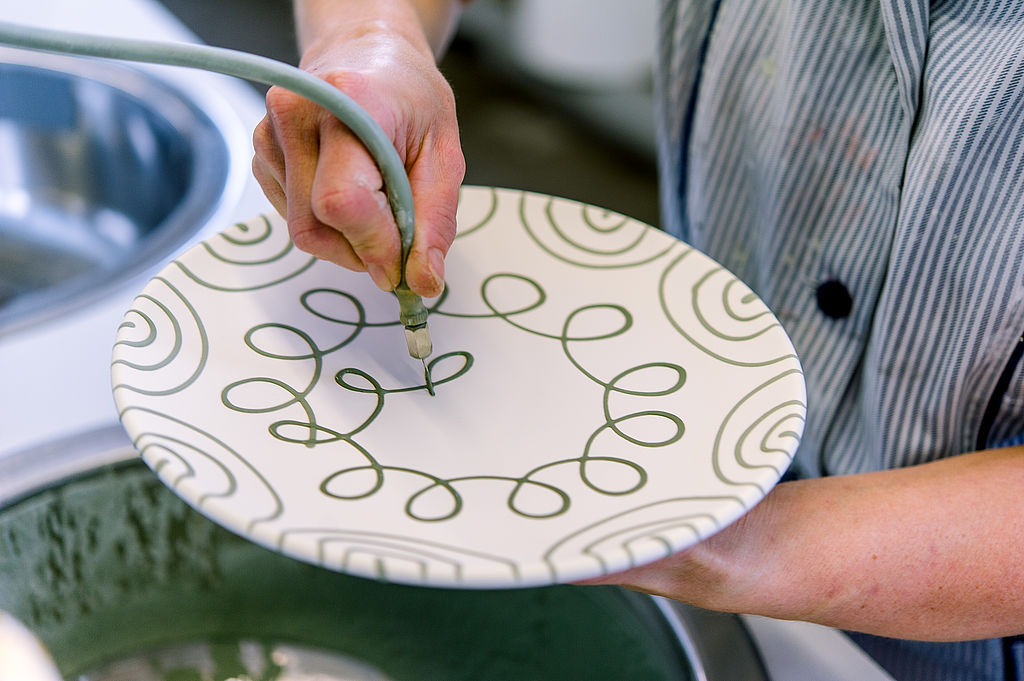