The "Glöcklerlauf" in Ebensee
Social practices in Upper Austria, inscribed 2010

The "Glöcklerlauf" [Bell Ringers’ Procession] in Ebensee, which takes place on 5 January of each year, is typified by the all-white dress of the participants (who march in groups referred to as "Passen"), the wearing and ringing of large bells, the various other figures marching along, and the bearing of illuminated outsized caps. Recent decades have seen interest in the "Glöcklerlauf" processions increase in large parts of the Salzkammergut region due to the recognition of this tradition’s touristic potential.

On the eve of Three Kings’ Day, the last of the Twelve Days of Christmas, the Glöckler [bell ringers] march through their communities in single file with cowbells on their backs and giant illuminated caps on their heads. They are accompanied by Absammler [collectors (of donations)] as well as the so-called Spionen [spies] who see to the caps’ protection and care. In all this, the illuminated caps themselves are the true attraction—for they are the products of painstaking work engaged in all year by the members of the Glöcklerpassen. One sees caps done in the form of buildings such as towers or churches as well as artful compositions comprised of geometric shapes.

It was from Ebensee that this tradition eventually spread across the entire Salzkammergut and Wolfgangsee region as well as into Styria, where Glöcklerlauf events modelled after the one in Ebensee exist to this day in places such as Hinterwildalpen. The Glöcklerpassen place great importance on involving young people in the Glöcklerlauf—and to this end, there are special children’s and youth Passen that help convey the value and joy to be had from this tradition to succeeding generations and gradually involve the children and teenagers in the adult groups.

While it was initially only young bachelors who were permitted to take part in the annual processions, it is now no longer required that one be unmarried. And in recent decades, women and girls have also been seen participating in the Glöcklerlauf event in the most varied roles. 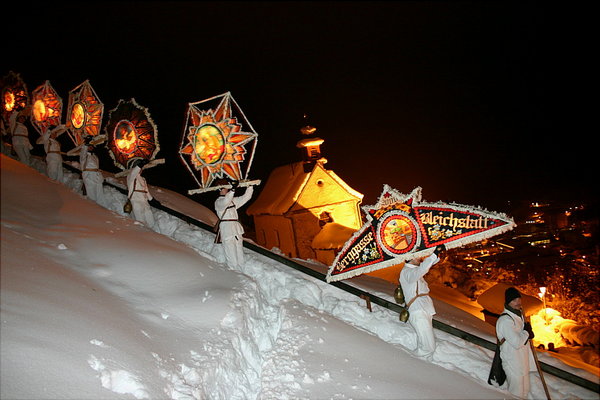