Traditional landscape nativity scenes ("Landschaftskrippen") are typical folk-religious nativity scenes depicting the birth of Christ embedded in local landscapes. Over time, originally small scenes developed into entire “landscapes” including hundreds of carved figurines that often filled entire rooms. Even today, people still visit private homes in the Salzkammergut region during the Advent season to view the hundreds of landscape nativity scenes set up each year, a fact that points to the unbroken significance of this tradition for this region’s populace.

Following Emperor Joseph II’s issuance of a decree in 1782 prohibiting the exhibition of the often highly ostentatious nativity scenes typical of that era, many people with good handcrafting skills began carving their own nativity figures and arraying them in their homes. So despite (or perhaps thanks to) this ban by the Habsburg monarchy, the Salzkammergut region saw the emergence of a special type of nativity scene during the 19th century. The uniqueness of these figurative and outsized landscape nativity scenes is also indicated by the local dialect’s distinction between Krippen (lit.: “cribs”) for the small, triangular scenes and Krippö to describe large landscape nativity scenes that fill an entire room. Also characteristic is the design, which depicts not only the Salzkammergut’s landscape but also the lives and work of farmers, shepherds, salt mine workers, woodworkers, hunters, and poachers as well as the alpine world in general.
Not only are the art of carving is still passed on from one family generation to the next, but the designs of the numerous preserved scenes and the “proper” positioning of the manger and the individual figures are also part of this knowledge. The annual set-up of these scenes in private homes for the most part takes place on 8 December (the Feast of the Immaculate Conception). Families clear out entire rooms in order to use them entirely for the nativity scene and its viewing by members of the public doing the so-called Kripperlroas [nativity scene tour] from 8 December to 2 February (Candlemas). 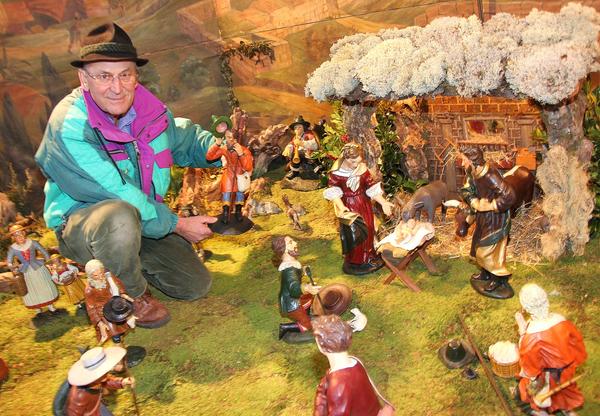