"Samsontragen" in the Lungau Region and the District of Murau
Social practices in Salzburg, Styria, inscribed 2010

The tradition of "Samsontragen" [lit.: carrying Samson] is a permanent element of this region’s traditional calendar and always attracts numerous onlookers. The period before and after Corpus Christi (referred to locally as "Prangtag") sees representations of the Biblical character of Samson—in the form of procession figures nearly seven metres tall and weighing up to 100 kg—paraded publicly with accompaniment by the local brass bands in 12 communities in Salzburg’s Lungau region as well as in the neighbouring Styrian district of Murau. A given procession’s Samson figure rests on the shoulders of a single person, who is provided support by four individuals referred to as "Aufhaber".

This tradition dates back to the Baroque era, when Capuchin monks staged magnificent processions—on Corpus Christi and on Bruderschaftsmontag [Brotherhood Monday] eight days thereafter—that featured biblical depictions mounted on large parade floats. These processions featured the giant figure of Samson—an Old Testament judge—positioned among the members of the local marksmen’s guilds. By the close of the 18th century, at the latest, reforms to religious customs based on Enlightenment ideals brought with them a ban on the practice of carrying giant figures in processions. So since then, Samson has been carried not as part of the processions themselves, but before and thereafter.
The Samson tradition’s spread to various communities took place for various reasons: as an expression of popular piety, as a sign of renewed tradition-consciousness, or simply for the entertainment of the general populace. Today, the Samson figures—in addition their traditional appearances on procession days—are also brought out for special occasions in their local communities or in collaboration with tourism associations. And in order to keep the numerous spectators at a distance from the heavy figures, several Samson groups have now added dwarf-like characters who clown around as they parade.

Giant procession figures similar to those employed here are also known in other European countries such as Spain, Belgium, Portugal, and France. 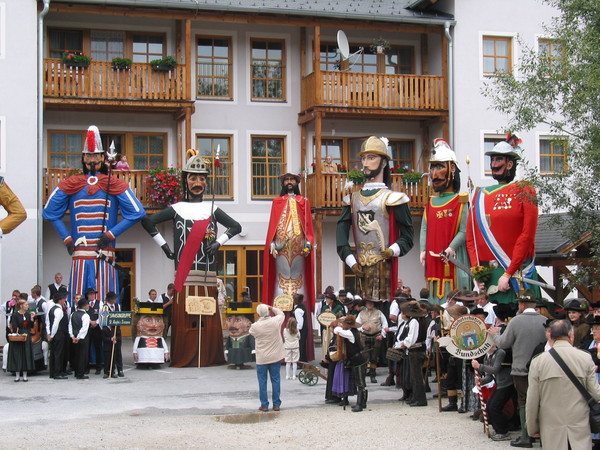