The Tyrolean Sacrament Guards ("Sakramentsgarden") were founded some 500 years ago, following the Spanish model of the Brotherhoods of Corpus Christi. They still continue to carry out their original duties as protector and escort of honour for the Blessed Sacrament. In historic dress and with historic weaponry, the four Sacrament Guard organisations deploy together at official church and secular ceremonies. The individual guardsmen are also present at private ceremonies such as weddings and funerals.

The beginning of the 16th century was marked by attacks on religious processions at various locations in the Holy Roman Empire. In many Tyrolean towns and villages, sacrament guards were employed to protect the Blessed Sacrament. From the original decree of Archduchess Magdalena of Austria to this day, a guard made up of local citizens—dressed in Spanish court attire and armed with polearm-like weapons called partisans—has accompanied the Blessed Sacrament. Over the course of history, many of the Tyrolean Sacrament Guards were disbanded, but the tradition has been preserved in the communities of Thaur, Hall, Volders, and Schwaz. The appointment to the Guards was formerly subject to strict rules and based on the position’s being passed on from one generation to the next—and today, family ties continue to play a certain role. In addition to traditional Tyrolean costumes, Sacramental Guard members carry richly ornamented halberds from the princely arsenal of Archduke Ferdinand II. The partisan is borne exclusively by the captain. The Guards fulfil many functions in the ecclesiastical and occasionally also political lives of the towns of Hall und Schwaz and the villages of Volders and Thaur, as they play an important part in processions and assume various ceremonial roles. Today, they are a significant element of regional identity and also involve themselves in social, cultural, and charitable activities in their communities. 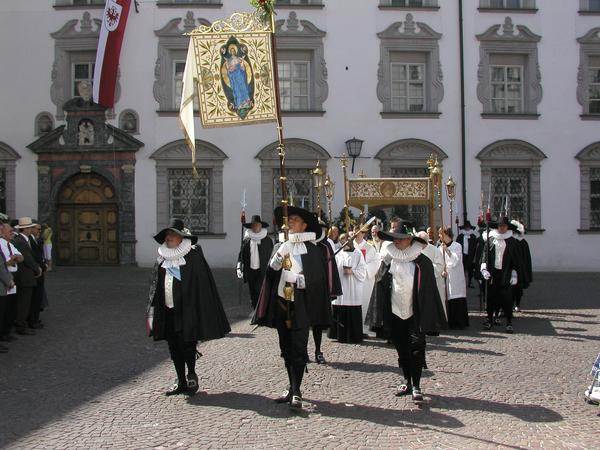