Ratcheting ("Ratschen") is a noisemaking tradition that is practiced in many parts of Austria in various forms during the days preceding Easter. A central element is the so-called "Ratsche" [ratchet], a mechanical percussion instrument made of wood, the sound of which is meant to replace the tolling of the silent church bells from Maundy Thursday to Easter Sunday. In the most common form of ratcheting, children go through the community at various times, making noise and chanting according to an established sequence.

The chants can vary from region to region and are either passed on from older children to younger ones or taught by an adult supervisor. The most common chant is the so-called Angel’s Greeting (Eng’lisher Gruß): “We ratchet, we ratchet the Angels’ Greeting, that every Catholic Christian must pray. Kneel down, kneel down on your knees, say three ‘Our Fathers’ and an ‘Ave Marie.’” Following this ratcheting, the children are rewarded with money, sweets, or Easter Eggs in the so-called Absammeln [collection].

Ratcheting is practiced in large parts of Austria and involves mostly acolytes and the members of scouting and church youth organizations. Characteristic is the interlacing of an ecclesiastical and religious event with a folk-cultural and social practice. The origins of this tradition can no longer be ascertained with any exactitude. Ratcheting probably grew out of early forms of wooden prayer tablets; the term itself has been used since the late Middle Ages. The tradition in which local youth go out ratcheting originated in the 18th century. While participation used to be limited to boys (for the most part those serving as acolytes), the period since the late 20th century has seen this tradition extended increasingly to girls. Ratcheting adheres to a ritualized sequence that alternates between the ratcheting itself and the chanting. For the most part, the participating children play equal roles, though some Lower Austrian groups accord one child the role of a group leader. 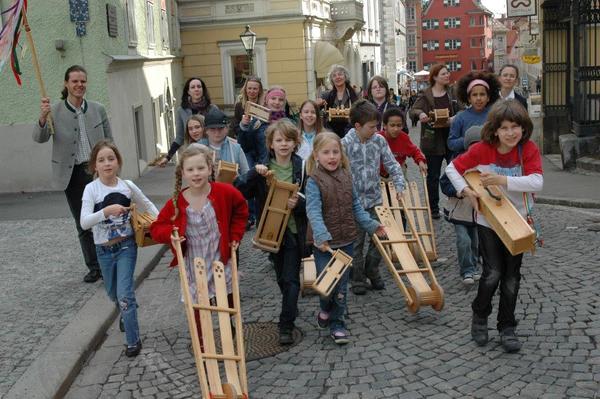