The Trattenbach pocket knife, a foldable knife that consists of a blade and a lathed wooden handle, has been hand-produced in Trattenbach, upper Austria for nearly 600 years. Many people carry a knife of this type on their persons as a constant companion that gets used for all sorts of things. Making this knife requires detailed knowledge of the materials involved as well as experience in working with steel, wood, and water power.

This model of pocket knife can be used in many ways. Frequent uses include as a knife for snacks or for carving, for harvesting mushrooms, as a souvenir, as a promotional item, as a keychain, or for Messerln, a game of skill in which two players compete to see who can best drop a half-opened knife onto a wooden surface from a height of 50 cm (the object being to have the knife’s blade penetrate and remain standing in the wood).

The long history of knife-making in Trattenbach exhibits a high degree of continuity. The first written mention of knife-making there is from 1422. Since then, the pocket knife has become a veritable symbol of (Upper) Austrian craftsmanship. And as such, knife-making in Trattenbach even managed to endure difficult periods such as the Industrial Revolution. Its production gradually came to involve various new occupational groups, the names of which are typical of the region. These include the Broater (bladesmith), the Härter (hardener), the Schleifer (blade grinder), the Bankfrau [“bench woman”—responsible for assembly and packaging], and the Drechsler [turner].

The strong competition from other producing countries around 2000—in particular from Asian countries—forced many producers of the Trattenbach pocket knife to close their businesses and thus give up their trades. Today, there are two businesses left that produce the Trattenbach pocket knife by hand. Knowledge about their production is passed on both orally and via sets of written instructions compiled in-house. 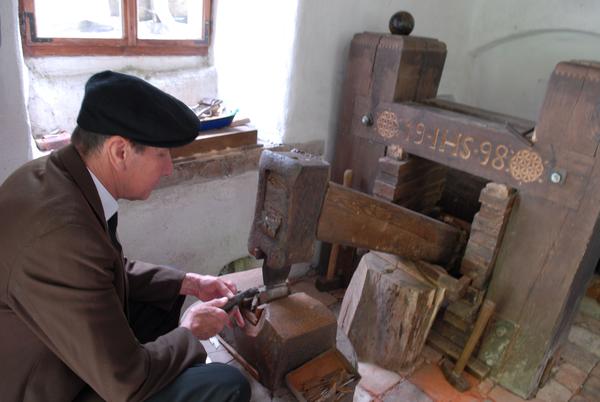