Perlåggen in the Tyrolean Oberland and Innsbruck regions
Social practices in Tyrol, inscribed 2016

"Perlåggen" is a card game, nowadays played above all in Tyrol, in which fibbing and misleading one’s opponents are important elements. The players are united in their being speakers of the Tyrolean dialect, which—with its special "Perlåggen" terminology—is of great importance. This terminology, collectively known as "Perlågger-Latein" [Perlåggen Latin] or "Kårter-Sprech" [card player-speak], includes a number of words for certain moves, special cards, and praising or rebuking other players for their actions.

The game is played mainly in groups of four individuals, with the members of each two-person team sitting diagonally across from each another. The process of bidding therefore requires some acting talent, including the ability to deceive and bluff. Communication within the teams takes place in the most secretive possible manner and both verbally and non-verbally (for the most part via traditional signals using the fingers, inconspicuous shrugs of the shoulders, and secret motions of the eyes and mouth). A primary reason for this game’s popularity is the Plodern [talking] that takes place—the things said and their interpretation as well as the fibbing and deceiving that serve either to inform one’s partner or mislead an opponent. All these diverse forms of communication, in their interaction with playing strategy and psychology, give the players a feeling of identity.

The term Perlåggen itself probably comes from the area around Salurn. There, Berlicche is the local name there for the Devil, who—just like the Perlåggen cards—can take on whatever form suits him. The game is played with 33 German-suited cards (acorns, leaves, bells, hearts), of which up to eight—depending on the region and the situation—are designated Perlågg and thus given a special function. Depending on the place where a game is played, both the number of cards that are Perlågg and the rules can vary. Local tournaments are held every year, and the past few years have also seen an all-Tyrol Perlåggen championship held, the location of which alternates between South and North Tyrol. 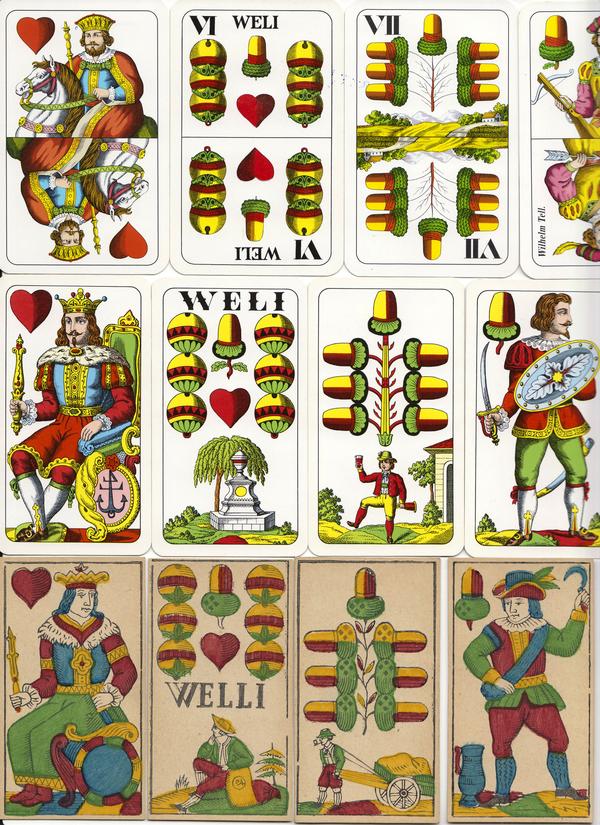