The “Liebstattsonntag” in Gmunden is held every year on the fourth Sunday in Lent. Gmunden’s traditional costume associations, together with the local "Goldhaube" and headscarf group, meet at 9:00 a.m. and proceed together to the town’s parish church. Following this, a parade forms with its own band and marches to the square in front of the town hall. After a brief greeting and an explanation of the tradition, the associations’ members give gifts of decorated gingerbread hearts to the townspeople and guests.

The origin of this tradition is thought to lie with the Corpus Christi Brotherhood, which was re-established in Gmunden in 1641, existed into the 18th century, and had as its mission the enrichment of the town’s religious life. Once each year, on the fourth Sunday in Lent, this brotherhood held a gathering at which the vow to be loyal to the faith and to brotherly love, called the “Liab’státt’n” [confirmation of love], was renewed. It is assumed that upon the dissolution of this brotherhood, at the latest, Liebstatt Sunday lost its religious roots. Following a brief face of decline, the period following the end of the Second World War saw renewed interest, with “paying ones loving respects” in the form of decorated gingerbread heart once again becoming important to the local populace. These Liebstattherzen are home-baked and decorated several weeks in advance, or they are purchased from confectioneries in Gmunden. Since 1977, the traditional costume association “Traunseer” has followed Liebstatt Sunday with visits to hospitals, nursing homes, and other local providers of social services in order to make gifts of Liebstattherzen to the patients, personnel, and residents. And since 2009, primary schools have also received visits in order to familiarise children with this custom. 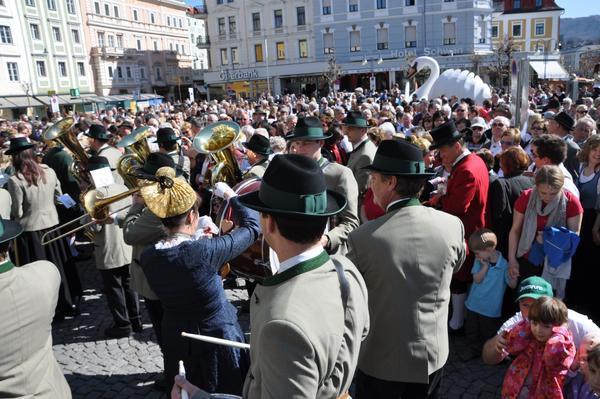