The tradition of Wreath Riding ("Kranzelreiten") in Weitensfeld, practiced annually at Pentecost, is divided into two parts. On Whit Sunday, the "Kranzelreiter" [wreath riders] ride from house to house accompanied by a brass band in traditional costumes, singing "G’stanzl" (humorous four-line dialect songs) about the events of the past year and inviting the houses’ residents to the upcoming event. This is a competition between riders and runners that is held as part of the fair that takes place the next day, Whit Monday. At the event’s conclusion, a waltz commonly known as the "Gurktalerwalzer" [Gurk Valley Waltz] is danced.

Oral sources indicate that Wreath Riding came into being during the 16th century, after the plague had wreaked havoc on Weitensfeld. The four survivors of that plague outbreak were the damsel of a villa called Thurnhof and three burghers’ sons. In order to choose her future husband, the damsel held a race—the winner of which she would permit to marry her. Wreath Riding arose as a way of commemorating this occurrence, with the race itself remaining the event’s core element. These days, the winner is awarded the wreath (Kranzel) and a silk scarf of the Stone Virgin (Steinerne Jungfrau), a statue that stands in the centre of the market square and serves as the Wreath Riding mascot. The second-placed competitor receives a myrtle bouquet and a woollen scarf, and the competitor in last place receives a bunch of hog bristles and a calico scarf. The winner—and only the winner—is allowed to give the Stone Virgin a hug and a kiss. Traditionally, every runner donates his prizes to a girl of his choice. And to conclude the event, all of the couples dance the Gurktalerwalzer, which—here—is also known as the Jungfrauenkusswalzer [Virgin’s Kiss Waltz].

Alongside the competitors, regional associations (including volunteer fire brigades, rural youth groups, and traditional costume groups) as well as the local brass band are involved in organising and running the Wreath Riding event. 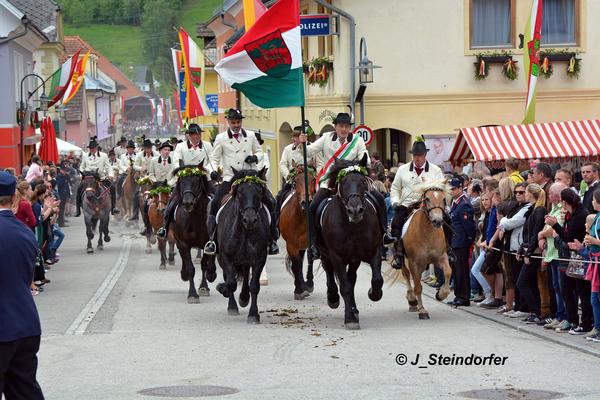