Knowledge of the locations, harvesting, and processing oft he spotted gentian
Knowledge concerning nature and the universe in Tyrol, inscribed 2013

The knowledge of the locations, harvesting procedure, and processing of the spotted gentian ("gentiana punctata") has been passed down for centuries in the Tyrolean community of Galtür. The entire population of the village is generally involved in the harvesting procedure—carefully digging up the precious roots—as well as the processing phase: the distillation of gentian schnapps. To this day, lots are drawn at the annual village fair to determine which families will be permitted to participate in harvesting the roots and distilling the schnapps.

In the alpine landscape around Galtür, gentian roots are harvested and gentian schnapps is distilled according to centuries-old tradition. As early as the 16th century, gentian schnapps—also referred to as Enzer—was mentioned in a botany book as a soothing remedy for stomach ailments. Since then, the Alpine regions where gentian grows have been frequented by so-called “root diggers” and “gentian pickers”.

Since the 17th century, local rules on the gathering of roots and general environmental regulations have ensured this rare gentian variety’s continued existence. Only once a year, on 1 October, is it permitted to dig up gentian roots. Lots are drawn at the annual Galtür Fair in September to determine which 13 families will be allowed to participate in the current year’s harvest, which takes place over an area of 17,000 hectares. The harvest usually begins with a trek up to the areas where the spotted gentian is found, at altitudes exceeding 2,000 metres above sea level. After the harvest, the roots are dried and cleaned. The precise procedure for finding the locations and both digging up and processing the roots is passed on orally from the older to the younger generation. An annual total of 1,300 kg (100 kg per family) of roots may be collected. Due to the strict limitations on root digging, the schnapps enjoys a commensurately special status and is consumed only on rare occasions or for medicinal purposes. 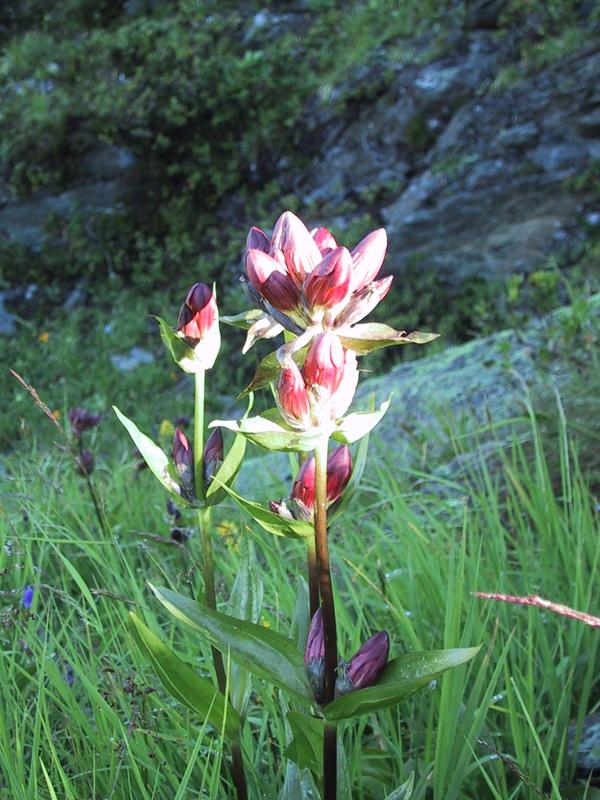