Every year between Christmas and Epiphany, a traditional form of carolling can be heard in the Villgraten Valley. For two days, groups dressed in costumes made specifically for the occasion go from house to house and sing traditional New Year’s carols.

These carolling activities are organised by the men’s choral society Männergesangsverein Außervillgraten as well as by the church choir Kirchenchor Innervillgraten. Most of the carollers are members of these associations, though the ways in which the carolling groups have been organised has changed repeatedly over the years. In contrast to the carolling organised by the group Katholische Aktion, the focus here is not on gathering donations for charitable causes but on interpersonal encounters. The days of carolling are preceded by a small number of rehearsals to refresh the groups’ repertoires, with a maximum of one new carol being learned each year. Some of these have been sung for decades, and the carollers already know which carols are particularly well-received in which homes. Carolling visits conclude with wishes of good luck and New Year’s blessings. Each caroller carries a so-called Stibich (a backpack-like vessel for threshed grain) on his back, which is used to collect the hosts’ offerings of food and drink that are then enjoyed as a group at a get-together afterwards known as a Stibichtreffen.

The carollers’ visits are an integral part of Villgraten Valley culture. In many homes, the carollers are invited in for a drink and a midday meal (known as a Marende). And the carollers, on their visits, place great importance on pleasant-sounding, meaningful singing and interpersonal encounters. In practicing their tradition, they seek to reinvigorate village life in the new year as well as bring light and joy to people’s lives. 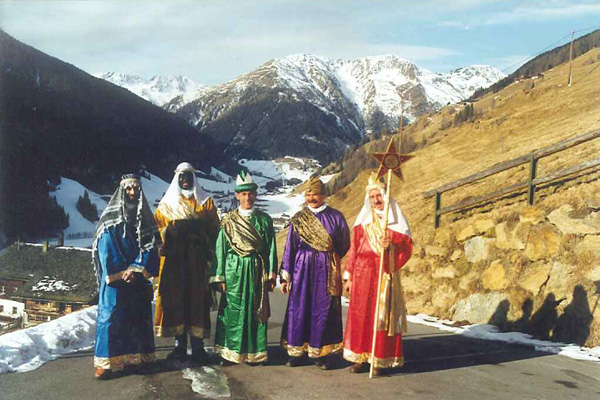