Bread-Making in the Lesachtal
Traditional craftsmanship in Carinthia, inscribed 2010

The tradition of bread-making in the Lesach Valley, especially in the communities of Maria Luggau and Liesing, encompasses the cultivation and preparation of grain in an Alpine farming region, the knowledge necessary to construct mills, and baking the bread in home ovens. These things go hand in hand with preservation of the valley’s cultural landscape as well as typical specialised dialect expressions.

People in the Lesach Valley maintain a centuries-old tradition of baking bread at home. These days, there are only a few families left who still grow their own grain and mill it in their own mills. But those who still bake bread in their own ovens at home have formed various associations and initiatives in an attempt to guarantee transmission of the relevant knowledge. The appellation Lesachtaler Brot [Lesach Valley Bread] refers to more than just the craft of bread-making. It also stands for human beings’ interaction with the cultural landscape they have shaped (with the Lesach Valley having once been known as “the valley of 100 mills”), for traditional grain-growing practices, and for the associated production processes and features of everyday culture. Examples include a special vocabulary specific to the Lesach Valley as well as certain everyday rituals such as crossing oneself three times before bread is cut or planting a small palm cross out in the field. The Mühlenfest [mill festival], which takes place every August in Maria Luggau, and the Lesachtal Village and Bread Festival (Lesachtaler Dorf- und Brotfest) on the first weekend of September contribute to conveying this tradition’s significance throughout the region.

The knowledge related to making this bread, the ovens, and the mills is not however, merely handed down from one generation to the next—it is also “exported”: in 2008 a Lesach Valley-style bread oven was installed by a Tyrolean oven setter and opened by a delegation from the Lesach Valley in the vicinity of Tokyo, Japan. 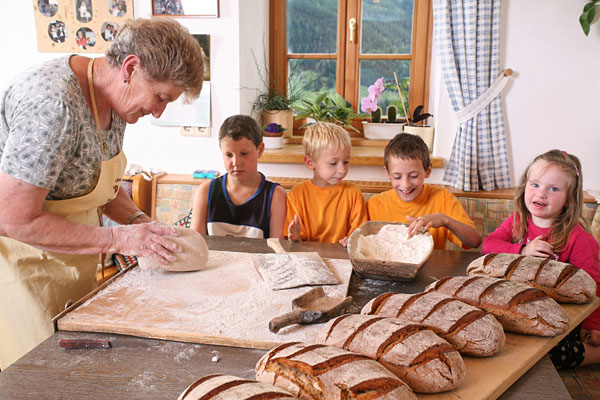