"Wampelerreiten" in Axams is done annually on the so-called “nonsensical Thursday” ("unsinniger Donnerstag") prior to "Fasching" [Carnival] Sunday. In focus here are the eponymous "Wampeler"—young boys and men who wear voluminous white linen shirts stuffed full with hay, lending the "Wampeler" their "Wampe", a colloquial German term for a fat belly. Their adversaries are the Reiter [Riders], who attempt to flip the "Wampeler" on their backs in order to soil their white shirts.

Wearing short red skirts over their pants and wide leather belts and equipped with short wooden staffs, the Wampeler parade through the community in a hunched-over posture. The battle between the Wampeler and the Reiter takes place according to established rules. When attacking, members of the Reiter faction may approach their adversaries only from behind. The staffs help the Wampeler to keep their balance and defend themselves from unfair attacks from the front. And if a Wampeler has his back to a building, a wall, a fence, or a well, he may not be attacked at all. But the opponents do eventually join in battle—in the specially marked “battle zones”, at the latest. The winner is the Wampeler who succeeds in keeping his white shirt the cleanest. After several rounds through the village, the best Wampeler with the cleanest back is determined at the village tavern. Axams’s Wampelerreiten is accompanied by so-called Banden [gangs] who spend the night in costume and moving from tavern to tavern, where they make music, dance, and satirise local circumstances. Every four years there is also a large parade, featuring Tuxer, Flitscheler, Boarischer, Bojazzl, and other figures typical of the region and of Tyrolean Fasnacht (Carnival) processions. An original figure here, however, is the Axamer Bock [Axam Goat]—a real, live animal. This goat is led by the so-called Goaßer [Goatherd], who recounts a curious event from the village’s recent history. 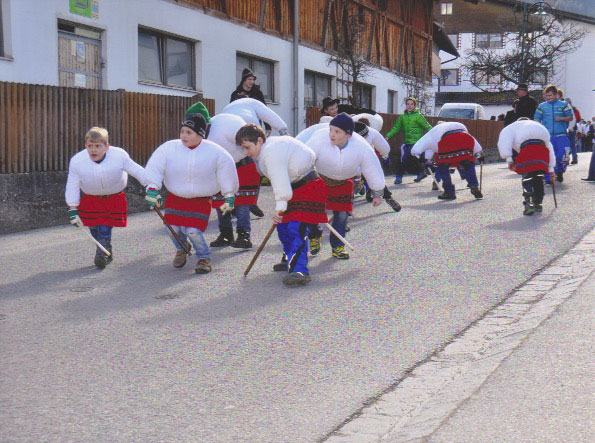