The Traunkirchner Mordsgschicht (Traunkirchen’s “murderously funny story”) is a narrative musical performance in the style of a “Moritat,” a form of cantastoria or bench song. Today, this tradition—originally practiced throughout the Salzkammergut region—can be found only in Traunkirchen. On the final Sunday before Lent, the singers parade from inn to inn wearing top hats and tailcoats to present humorous moments from the village’s past year. In return, the performers accept food and drink, donations to cover costs, or a meal together with those present as payment.

Between 2 p.m. and 10 p.m., eight stylishly dressed men go from one inn to the next to sing their Mordsgschicht songs. These songs are accompanied only by a guitar, and signs are shown bearing caricatures that illustrate the songs’ stories. Over the years, the basic melody of the Traunkirchen bench song has been retained, but the 1980s saw a new concluding verse added.
Since the beginning of the 20th century, the Mordsgschicht has been an annual obligatory date for the villagers, who gathered together at the various inns to learn just what all happened over the past year. Those who end up being the targets of ridicule typically interpret this as an honour and a form of recognition. Into the 1930s, this form of carnival tradition also existed in the surrounding communities—thereafter, however, the singing of murder ballads was replaced by typical present day Carnival celebrations with their Princely Couples and parades. Artistic direction has been passed from Carnival president to Carnival president, who is responsible for the overall theatrical and musical direction of the group of singers. The stories are collected over the course of the year and written up in rhymed form as murder ballads beginning in November. From then until the actual performances, these Mordsgschichten are kept so secret that even the singers are only in possession of the lyrics for the duration of each rehearsal. In recent years, young singers (Jungsänger) have been recruited in order to ensure that this tradition is also upheld by the next generation. 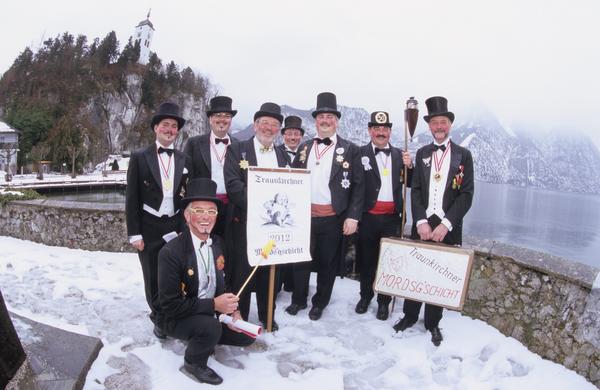