Three-Step Alpine Transhumance in the Bregenz Forest
Knowledge concerning nature and the universe in Vorarlberg, inscribed 2010

Three-step Alpine transhumance is an agricultural practice used to this day by farmers in the Bregenz Forest, whose land typically produces insufficient amounts of non-silage feed to keep their livestock nourished the entire year round. A seasonal cycle sees farm families first migrate with their cattle to a "Vorsäß" [a low-altitude mountain pasture] in the late spring and then up to the "Alpe" [an alpine pasture] around the beginning of July. And in mid-September, the families drive their cattle back down the mountain to their home farms in a celebratory manner, an event known as the "Alpabtrieb".

This cycle is a permanent component of the cultural heritage of farm families who operate their farms in this manner. However, three-step Alpine transhumance is important in the lives of all other inhabitants of the Bregenz Forest’s, as well: thanks to the milk- and cheese-based regional culinary products that can only be produced via this traditional agricultural practice as well as on account of the festivities and customs—like driving cattle up the mountain (Alpaufzug) and down the mountain (Alpabtrieb), Alpine masses (Alpmessen), alpine celebrations (Alpfeste), cheese markets, etc.—that are integral parts thereof. The uniqueness of the Bregenz Forest region’s typical cheese varieties is explained by the so-called “hay milk” (Heumilch) that can only be produced by doing without fermented feed.

Farm families have handed down the knowledge necessary for their work on the pastures in the context of three-step Alpine transhumance over many generations via demonstration, living examples, and oral transmission. Young people (traditionally—but no longer exclusively—male) from a given family or circle of friends begin learning Alpine agricultural practices from adults as so-called Pfister*innen. The later stages of this learning process see these Pfister*innen become Hirt*innen [shepherds], Senner*innen [Alpine herdspeople and cheese-makers], or Alpmeister*innen [supervisors/overseers].

Directly linked with these annual Alpine sojourns are the care and preservation of the associated cultural landscape. Regular use of Alpine meadows and mountain slopes prevents the encroachment of shrubs and weeds. And furthermore, the hoofprints of cows on steep slopes can also help prevent landslides, mud flows, and avalanches. 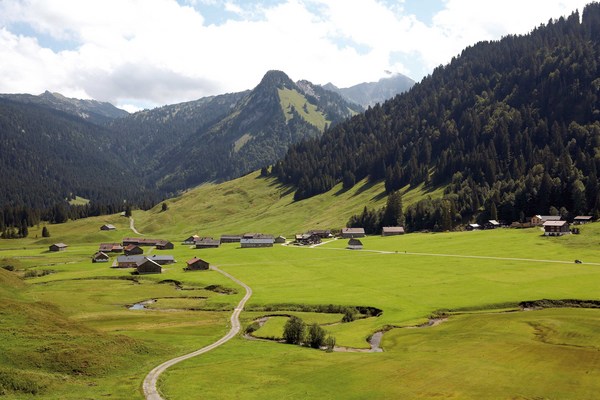