The The Vineyard Guards´ Procession in Perchtoldsdorf
Social practices in Lower Austria, inscribed 2010

Every first Sunday following the feast day of St. Leonhard (6 November) witnesses Perchtoldsdorf’s traditional Vineyard Guards’ Procession (called the "Hütereinzug" or, in the local dialect, "Hiataeinzug"). It was once customary for winemaking operations to employ vineyard guards during the period when grapes grow ripe. Such guards, sworn in and paid for by the community, would spend several weeks living in small huts out in the vineyards to protect the ripening grapes from both animals and human thieves. Since this job ceased to exist, it has been mainly the sons of winegrowers—starting from around age 15—who have played the part of the guards in this festive procession.

The Vineyard Guards’ Procession thus remains an annually recurring event on vintners’ annual calendar in Perchtoldsdorf, though the job of vineyard guard became obsolete and disappeared over the course of the 1970s. These days, it is above all young men from winegrowing families who—as guards (Hiata)—enter the church together with their families and the local brass band in this procession, which integrates a Mass of Thanksgiving. A central element of this procession is the Pritschn (a rotating object ca. 70 kg in weight, fastened to a rod, and decorated with oak leaves), at the top end of which are two golden hearts formed from walnuts. This Pritschn serves as a “harvest crown” (Erntekrone), which—following the celebration of mass—is taken first to the priory and then to the town hall. When the procession reaches the market square, the head guard—the Oberhiata—leads his fellows in a performance of Gstanzln (humorously rhymed songs) sung to an old melody but with new, self-authored lyrics. These lyrics mostly concern political and private events of the past year. The overall festivities run from Saturday to Monday, beginning with the “pre-celebration” (Vorfeier) on Saturday evening. The procession takes place Sunday morning, after which Monday’s “post-celebration” (Nachfeier) brings the festivities to a relaxed conclusion involving the Hiata at a small gathering at the house of the “father of the guards” (Hütervater).

The tradition of the Vineyard Guards’ Procession has been practiced for generations within the community of Perchtoldsdorf’s vintners and the individual winemaking families. 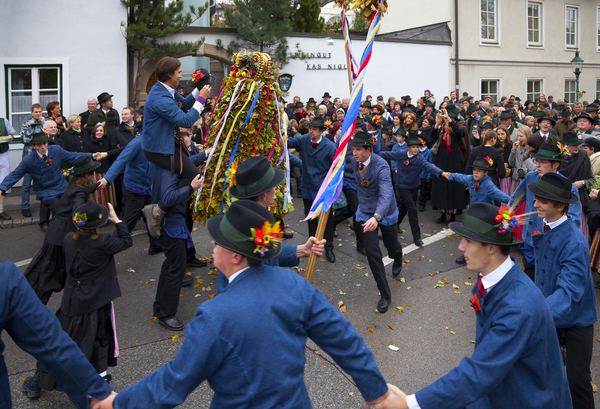