"Taubenschießen" (lit. “pigeon shooting”) is a sport that used to be widespread, from the North Sea to South Tyrol, but the only places where it is still practiced today are Altaussee and the Bavarian community of Nußdorf am Inn. This social sport—involving at least three shooters and a wooden pigeon—takes place annually from the first Sunday following All Souls until a week before "Fasching" [Carnival] Sunday, when the members of the corresponding association (the "Taubenschützenverein") meet to play at the inn Schneiderwirt.

Taubenschießen probably arose as a “shooting” sport for the lower classes, for whom firearm ownership used to be forbidden. The shooting range is constructed around a giant pendulum. The projectile to be “shot” (or, more to the point, released) is an approximately 2 kg wooden pigeon with an iron beak that hangs from an 8 m chain made of steel wire links. The tail of the pigeon attaches to a string—which the marksman, with as steady a hand as possible, has to bring into line with the chain and the middle of the target. When the marksman lets go of the string, the ensuing pendulum motion sends the pigeon swinging towards the target, in which it lodges itself thanks to its iron beak. The Zieler [target attendant] then records the shot’s result on the edge of the target and swings the pigeon back to the Aufigeber [server], who hands the pigeon to the next marksman.

At the season’s end, Fasching Saturday features a meal for the marksmen with an awards ceremony while Rose Monday includes a tour of the community’s inns. On this tour, the marksmen carry along a hand-painted wooden target on which, each year, an association member is immortalised as a caricature. This individual is selected in “honour” of some amusing blunder that he or she committed during the preceding year. 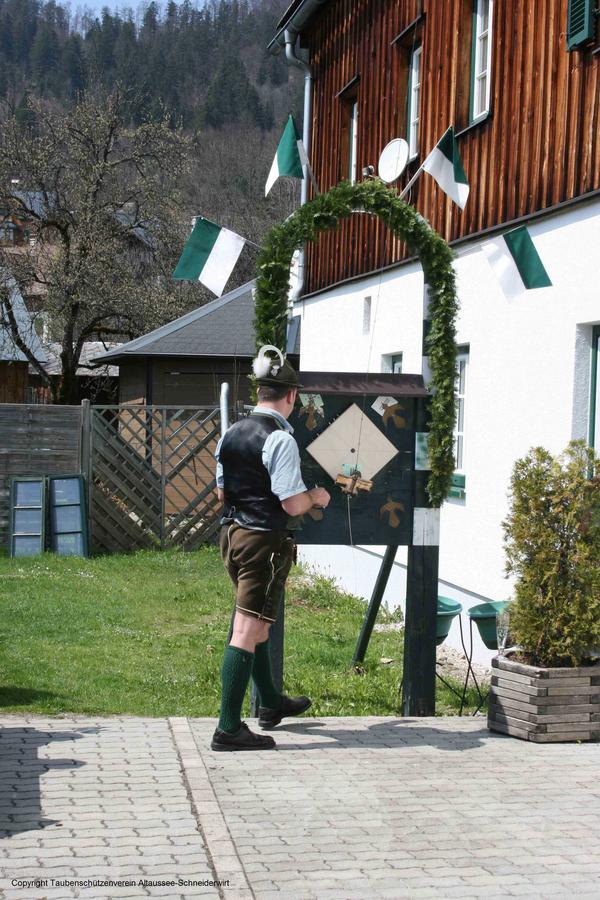