Terrazzo is a long-lived, heavy-duty, and low-maintenance type of flooring that can be decorated in a broad diversity of patterns and is produced without chemical additives. To create a terrazzo floor, shovels are used for the portion-by-portion application of a cementitious binding material, onto which—depending on the variety of terrazzo to be produced—stones of ca. 10–22 mm diameter are spread by hand. Next, the terrazzo chips are beaten ("geprackt"), rolled with an iron terrazzo roller, and smoothed out by hand several times in order to achieve their even distribution.

Once the material has cured, several rounds of wet grinding alternate with the application of a grout formulated by the terrazzo makers themselves—for which reason every terrazzo floor represents a unique handmade creation.

The traditional technique of making terrazzo by hand has existed since the Neolithic Age and was widely employed in ancient Asia Minor, ancient Greece, and the Roman Empire. Terrazzo came to Austria during the 19th-century Ringstraße era, brought by workers from other parts of the Habsburg Monarchy who were involved in constructing the representative buildings on Vienna’s Ring Road. During the art nouveau period, terrazzo was one of the most important flooring materials alongside ceramic tile. Furthermore, beginning in the 1920s and to an increasing extent in the 1950s and ’60s, terrazzo was used in the stairwells, kitchens, toilets, and bathrooms of public housing complexes. Terrazzo floors are labour-intensive and more expensive to create than other types of flooring, making them an unpopular choice today. And while Vienna was still home to 35 terrazzo businesses in 1970, the year 2015 saw terrazzo-making cease to be a trade in which officially recognised apprenticeships are offered. Thus, knowledge of the techniques required to produce traditional handcrafted terrazzo can no longer be passed on with the necessary intensity, meaning that it is presently at risk of extinction. 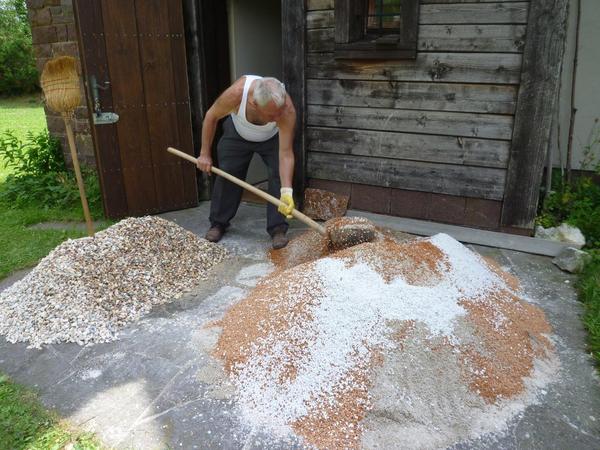