THE BELLRINGERS OF PATSCH
Social practices in Tyrol, inscribed 2022

The Bellringers of Patsch (“Patscher Schellenschlagerinnen”) carry out their traditional carnival procession each year on Fat Thursday. The bellringers, who are masked and line up in rows of two in size order, “ring” the bells to the rhythm of the witch. Although bellringing can be observed at many other carnival celebrations in Tyrol, what is different about the performers in Patsch is that they are exclusively women.

The procession of the Bellringers of Patsch came about during the carnival celebrations in 1958, when the men of Patsch could not bring themselves to carry out the traditional bellringing. So as not to let this practice tail off, the local women decided to take the initiative and take matters into their own hands. Since then, the bellringers have become an integral part of the annual carnival celebrations in the village of Patsch. The figure of the bellringer, who makes an appearance during carnival, is characterised by her wooden mask, a hat decorated with feathers, ornamental flowers, and trims, and a costume consisting of a white blouse with colourful ribbons, a shawl, and knee-breeches. Additionally, each bellringer holds and rings a bell with both hands on the handle behind her back; it is not tied on. Each year on Fat Thursday, the bellringers perform at four locations in the village of Patsch and follow a set routine. The masked figures march in size order and in rows of two in time with the witch. The witch also indicates that the bellringing is over with her broom and the bellringers ring out at the same time (“ausschellen”) to symbolise the end. Following this, the group’s accordion players start the dance, and the spectators are invited into the middle of the square to join in. At the end of the dance, all the bells are rung again.

This tradition has changed over the course of time. For example, the procession’s route through the village changed due to the dwindling number of inns. Moreover, at the beginning, men wearing Bujazl costumes accompanied the bellringers in the traditional role of “Vorhupfer” [someone who leads the way]. Since 2009, the bellringers have been led by female members dressed as witches. Fat Thursday’s procession is an important event for the people of Patsch. Besides the bellringers, there are also performances by Patch’s local heritage group, its marching band, and the “Patscher Fögler”, in this order.

The Bellringers of Patsch are an exception in the male-dominated traditional Tyrolean carnival. The costumes, particularly hats, satchels, and masks, are usually handed down from mother to daughter, or grandmother to granddaughter. However, parts of the costume are also gifted on special occasions. The participating women either grew up in Patch, live in Patsch, or have moved to Patsch. As a result, the custom has a great integrative character and is equally an essential part of the local identity. Besides during carnival, the Bellringers of Patsch also perform at other times, for example at Christmas markets, during diverse fundraising activities, and at cultural events. The association’s members and other interested parties are continuously informed about events and activities on social media and on the association’s own website. 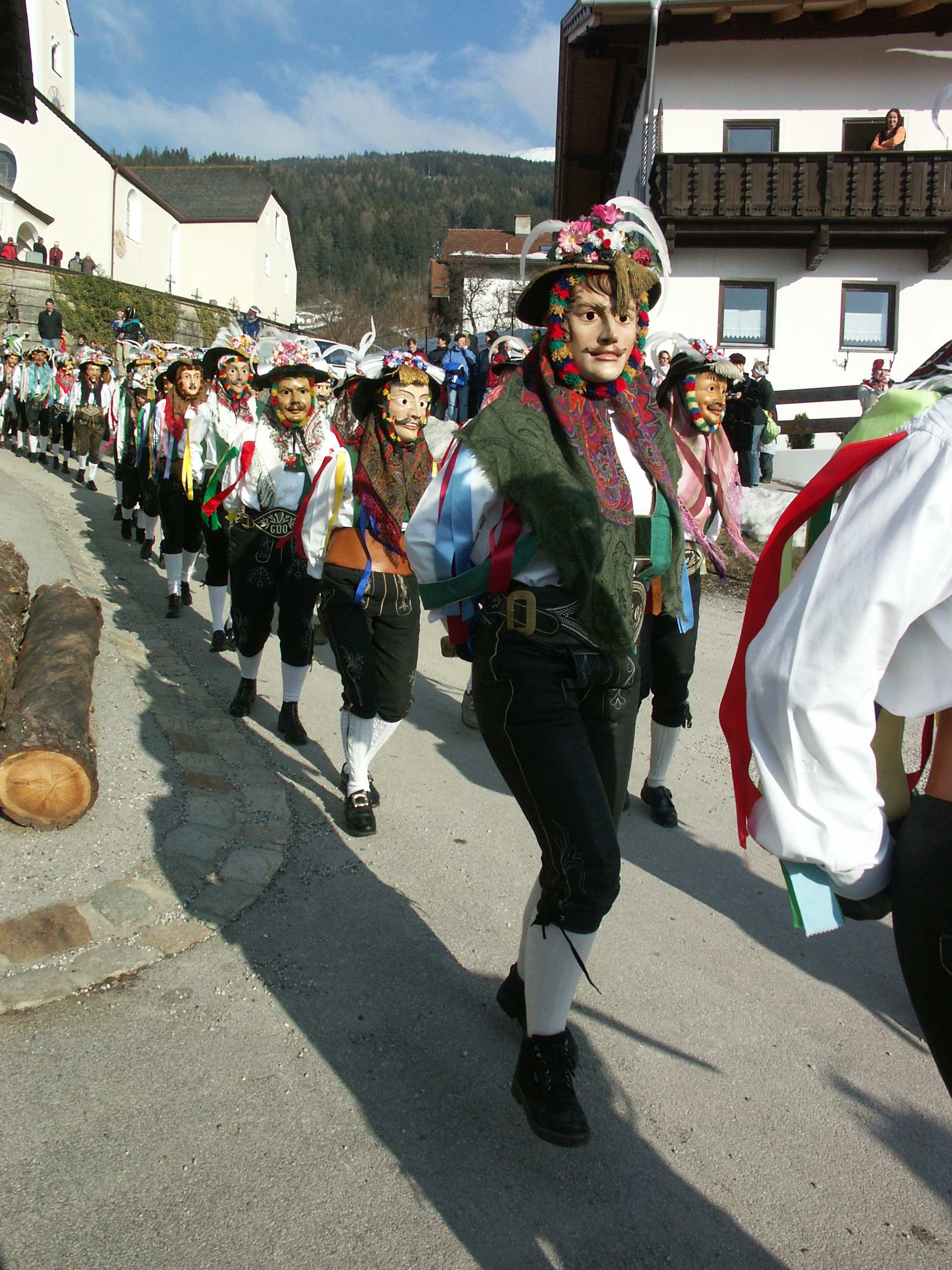