The Saint Nicholas Play in Bad Mitterndorf is presented each year on 5 December at various locations. The play is acted out in indoor spaces as well as in the form of a procession. The performance was originally held in farmhouses and inns, but since 1959 the event has been presented on Bad Mitterndorf’s main square, thus making it accessible to a wider audience. The Saint Nicholas Play is made up of various figures that form a procession between the performance venues.

The first written sources regarding the Saint Nicholas Play date back to the 19th century; previously, the texts were for decades passed down orally. The sequence of the play’s scenes has remained largely unchanged over the centuries. The entrances of the Quartermaster, followed by a Krampus and then the Angel, lead up to the key scene in which Bishop Nicholas makes his appearance. The priest accompanying him tests the catechetical knowledge of the children present. The Everyman scene, the entrance of the Marriage Devil and Lucifer, as the “Prince of Darkness”, and the boisterous antics of the Krampusse complement the play. After the horn signal of the Night Watchman, the horrific scene is over and the figures move on. Between the performance venues, the figures form a long, masked procession that is led by so-called “Schab”, men wrapped in straw with five-metre-long horns. The “Schab” clear the way for the individual characters of the play by loudly cracking their whips in an eight-beat pattern.

The maintenance of order, the observance of laws and rules, and obedience as the path to divine mercy are present as a subtext throughout the play. Among the requisites are hand carved masks, coats of fur, bells, and other objects that are preserved and exhibited in the “Heimatkundliche Sammlung Strick” in Bad Mitterndorf.

Not only the Saint Nicholas Play itself but also the rituals and customs in the weeks leading up to 5 December, such as “Kramperl gehen” (dressing up and carousing as Krampus), are part of Bad Mitterndorf’s “fifth season”. Beginning on the first weekend of November, children take the opportunity to practise cracking the whip in an eight-beat pattern, and the 140 members of the St Nicholas group also enjoy a pleasant get-together to prepare for the event, with the actors and actresses of the individual scenes practising their own rituals in smaller groups. 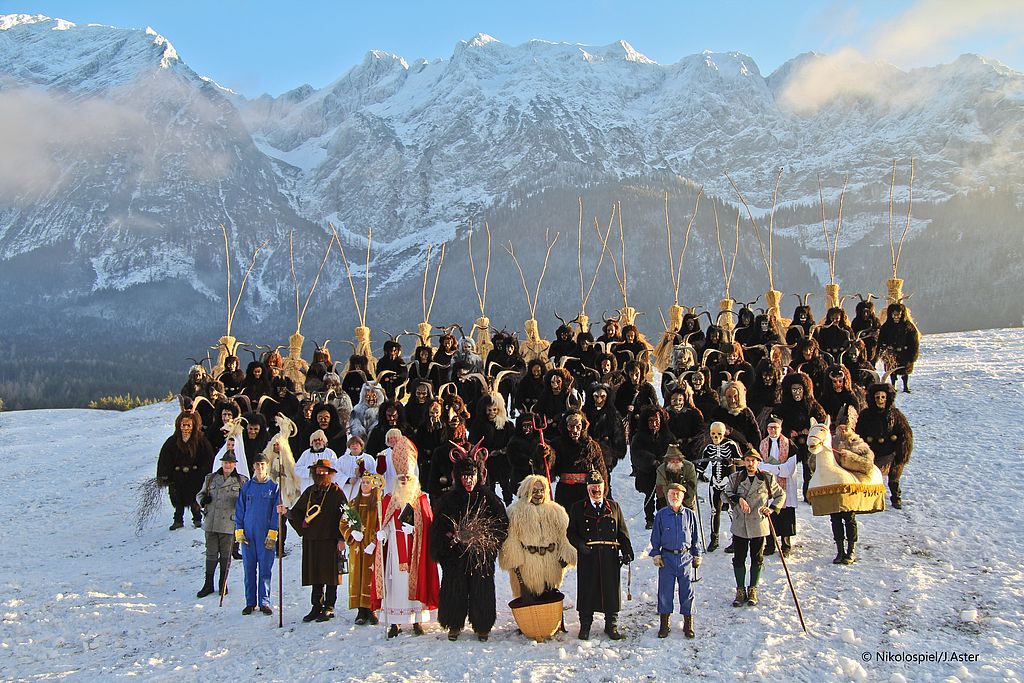