Disc flinging ("Scheibenschlagen") is practiced in several southern Vorarlberg communities on the first Sunday of Lent. Special discs made of alder or birch are mounted on 70-to-100 cm long hazel branches, made to glow in the so-called "Vorfeuer" [preliminary fire], and then shot off of the branches with the help of a small wooden ramp built like a tilted bench. In a successful shot, the glowing disc traces a luminous arc through the dark night sky.

As the participants shoot, they call out sayings that address specific people from the community by name—honouring them, making fun of them, or even exposing secret romantic liaisons. Disc flingers can often be young men, teens and schoolchildren, but are above all members of groups such as so-called spark guilds (Funkenzünfte).

It is no longer possible to ascertain the exact origins of this practice. Historical sources on disc flinging exist from as far back as the 17th century, though these actually often describe bans on the practice due to its being a fire hazard. There are several 19th-century sources, however, that deal with disc-flinging out of an interest in folk traditions. In several communities, the traditional sayings (Scheibensprüche) to be recited simultaneously with the discs’ launch have faded into obscurity. In Gortipohl, for instance, evidence for the existence of such sayings ends in the 1920s. But the communities of Beschling and Nenzing, on the other hand, have preserved them to this day. 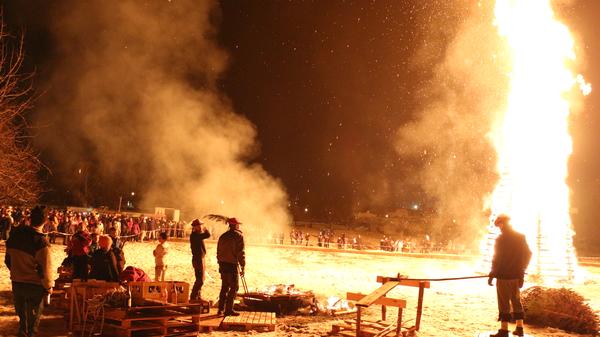