THE CRAFT OF AUSTRIAN CONFECTIONERY
Traditional craftsmanship throughout Austria, inscribed 2022

Much of a confectioner’s work is still manual to this day. This craft has been handed down over generations and has taken on a regional, company-specific, and transnational character. It requires precision as well as creativity and adaptation in its further development. The ingredients and the traditional processing and working methods, which use a wide variety of tools, have hardly changed over the centuries, although they have undergone adaptation and constant development.

In Austria, the craft of confectionery has several origins: the bakers’ profession, gingerbread makers, the aristocratic court kitchens, as well as the large hotel kitchens. Due to the falling prices of sugar from the 19th century onwards and the growing popularity of a wide variety of pastries, the craft became widespread and anchored in Austrian (food) culture. The production of these sweet foods is based on a variety of working techniques that have been fostered for centuries, such as boiling, infusing, blowing, and spinning sugar, or tempering and pouring chocolate. The equipment and tools developed for the preparation of ingredients for these purposes (sugar, eggs, flour, dairy products) are still in use. These include pouring funnels, glazing grids, cutters, powder boxes, nozzles, etc. The interplay between permanence and change, whereby knowledge is not rigidly passed on but actually handed down, is important for the confectioners: new shapes, variations, and extensions resulting from social changes and technical innovations are linked with traditional knowledge.

The confectioners’ creations play an important role for people at special events or activities. They are gifted at celebrations and as thank you presents and are tailored to suit special occasions. A patisserie’s seating area is called the "salon” and this is an everyday meeting place, be it for coffee or a sweet afternoon snack. Adapting to customers’ demands is one of the reasons for the craft’s continuous development. Nevertheless, there is a danger of losing this knowledge due to mass production and a lack of young people learning the craft. Today there are around 1,300 confectioners in Austria. Some of this knowledge is still passed on within the family, but it is handed down above all through dual vocational training (apprentice - journeyman - master craftsman). Traditional workwear, especially the confectioner's hat, has always formed part of the common identity and the craft’s trademark. Joint events, competitions, (trans)national meetings, and the confectioner’s ball in Vienna, which has been held for 120 years, strengthen the community and exchange. 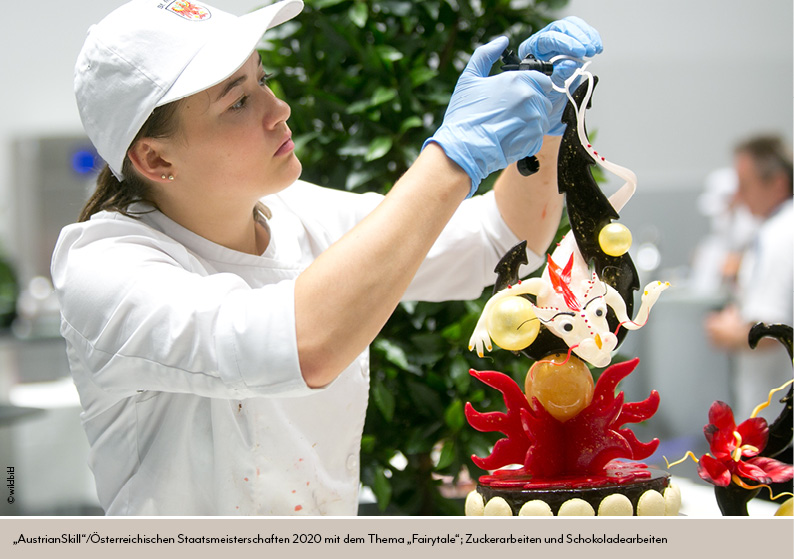